The most central blocks of wooden buildings in Oulu – with national significance – are the Rantakortteli ones adjacent to the Market Square. They are a window to the era of wealth in Oulu due to trade and seafaring in the 1870s and 1880s, when many trade-educated businessmen worked in Oulu. After the third and final Oulu Fire, handsome houses were built on Rantakatu, Ojakatu, and Hallituskatu streets in the spirit of neo-renaissance and art nouveau. Some stone buildings are included.

If you stand back-to-back with the plump Market Square Policeman’s statue, you will see the pink House Höckert across Rantakatu street as well as the pastel green House Jurvelius on the left. Together they constitute a significant and recognisable part of the Oulu cityscape around the Market Square. House Jurvelius was built in the empire style and is the oldest wooden building (1828–1945) on Rantakatu street. Nowadays it is used as a student residence. The first ever electrical lighting system for a private home in Oulu was installed in the house in the year 1900! House Höckert dates to 1838.

Also the Ojakatu and Hallituskatu streets still have some of the construction milieu built after the Oulu Fire in 1882. The single-floor wooden neo-renaissance building of the Oulu Trade Society was built in 1884. 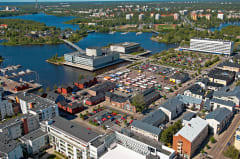